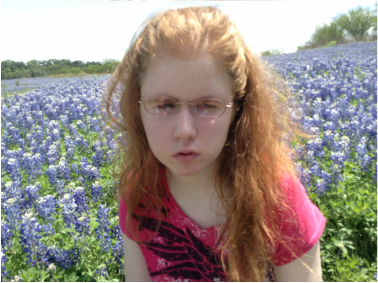 Sanctity of life begins in the womb. God knew me before I was conceived. He knew my life would be challenged by seizures, stomach pains, word retrieval problems, headaches, motor planning issues, etc. Yet, He had plans for my life that would bless me and my family.

Twenty-seven years ago, I was born in Georgetown, Texas to Jim and Marilyn Dixon. Problems in birth were not apparent.  I began rolling over, smiling, and laughing early. After my DPT immunizations, I began having what looked like stomach cramps. However, they turned out to be seizures called infantile spasms. Papa and Mama took me to a neurologist because I had stopped smiling and progressing. He let them know about my epilepsy and my prognosis. The future looked bleak, but they were ready to fight to control my seizures.

In the beginning, Mom gave me daily shots of ACTH.  Other seizure drugs were tried throughout the years. I have tons of allergies so it has been hard finding drugs that help that I don’t react negatively to. Some drugs caused seizures to increase. One caused pneumonia. Most cause constipation and gut pain.

When I was 10, I had surgery on my brain. Seizures went away for 2 months, but then they came back. Team Dixon tried the Vagus Nerve Stimulator and many dietary changes which helped some, but still I struggled with seizures. Always my parents kept loving me.

Seven years ago, I began to have multiple seizure episodes, and I became so ill I had to go to the hospital. We became fearful for my life, but God sent a lady who quoted scripture and we became at peace.  She might have been an angel.  We never saw her again.  The scripture the lady quoted to us was Jeremiah 29:11,  "For I know the plans I have for you, " declares the Lord, "plans to prosper you and not to harm you, plans to give you hope and a future."   I recovered that time, but continued to have episodes of back-to-back seizures twice a year.  Each time I ended up in the hospital.  My awesome mom finally figured out that it was undetected  urinary tract infections that was causing the irratractable seizure episodes.  She found a homeopathic remedy online to treat UTIs.  Now, I don't have those episodes any more.

Why the many treatments we tried to stop my seizures were short-lived or didn't work at all I will always wonder.  Now, we are finally having some hope.  In December 2010, we started a new diet called the Modified Atkins Diet for Seizures.  Mom found out about it on the internet after seeing a movie call  First Do No Harm.  The movie was about the Ketogenic Diet.  We had never tried that diet because of my many allergies, especially to milk.  Cream was used a lot in the Ketogenic diet.  The MAD diet was similar, but no fasting was required, and oils and other fats could be substituted for the cream.  Much progress I have made on this diet.  My seizures are much milder and less frequent.  I am usually more energetic and feel a lot better.  I have fewer episodes of gut/stomach distress and rarely grind my teeth in pain anymore.  I have been able to lower my seizure medicines and my Vagus Nerve Stimulator, too.  This has been slow progress, but I feel confident that we are now on the right road to win this battle.